Khwezi Gumede is one of most exciting fast-bowling talents in South Africa, his searing left-arm seamers has had some of the most accomplished professional cricketers in South Africa hopping all over the place. A Durban lad originally, he came through the Kwa-Zulu Natal age groups from U17 onwards. Whilst a little inconsistent, like many young seamers, his numbers continued to improve as he progress through U19 cricket and into the Dolphins Academy. 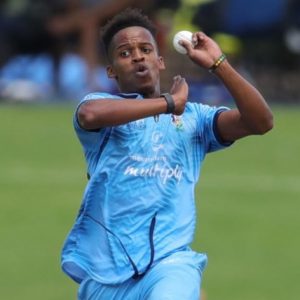 Khwezi was then signed by Easterns and, by the end of summer 2019-20, he had forced his way into the Titans side off the back of his electric white-ball form, finishing the season with 23 wickets @ 18.34 including a best of 5-48 against Boland. He would make 3 appearances for the Titans in the Momentum One Day Cup, picking up 4 wickets.

With his flowing left-arm action, Khwezi will have plenty of club cricketers getting a little closer to the square leg umpire.